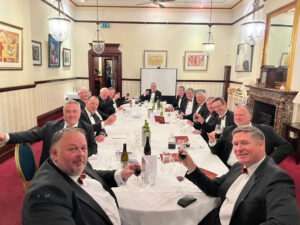 The 2022 Welsh Dinner took place on Friday 29th April at the Cardiff & County Club. Many thanks to Stephen Whitehead for organising. A list of attendees can be found below, alongside a report from Stephen Whitehead (Christ’s, CURUFC, 1969-72): 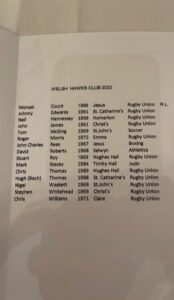 With a dogged determination only to be anticipated of Hawks, the 2022 Welsh Dinner took place at the fourth attempt on the 29th April.

The diminution in size of the gathering from the original January date, (when postponement had been necessitated as numbers had grown ironically to 60 and double the legal COVID limit), was variously blamed on the organiser’s failure to appreciate that it was a Bank Holiday weekend; the start of the cricket season, that crucially  Emmerdale and the Great Bake off finale were on the telly and allegedly, it collided with Matthew de Maid’s quarterly Avon Calling house party.

“ More wine for  us “ roared Huw Bach Thomas in anticipation as the simply excellent menu was about to be served.

The Dinner, however, commenced on a more sombre note as John James called for a moment’s silence in memory of the loss of two great Welsh men and supreme Hawks : Jeff Bird and Brian Rees. We also noted that for almost the first time Dennis Gethin and Russell Jenkin’s Health precluded their attendance.

Post Dinner, the floor was opened and a serious debate with everyone contributing was triggered by Stuart Roy asking John Charles Rees to outline the legal debate around head trauma in contact sport, individual choice and duty of care by The Sporting Bodies.

John held rapt the attention of all with as simply a clear and brilliant explanation of the case from all fronts as one would anticipate from a leading QC for the British Boxing Board of Control. The experience and control of his Governing Body was a quality standard for the likes of rugby and soccer. The implication for youngsters being allowed into amateur sport was self evidenced.

The evening moved seamlessly on, however, with reminiscence of great Welsh Hawks – yes ! the inimitable Brian Rees and Brian Thomas! But,  Gentleman , just as anything that “goes on” on tour stays on tour, raucous accounts of such made at our Dinner, remain with the crusts of the Welsh Rarebit. ( and, social responsibilities aside, is  it humanly possible for an entire piano to be thrown out of a fifth floor hotel room by one man, any way ?)

Around a dozen confirmations have already been received for the 2023 Dinner on Friday January 20. Further details from Steve Whitehead whiteheadstephen3@googlemail.com