In a couple of weeks time, Sean Nuttall (Kings, CUSWPC, 2004-2005) will be attempting the eighth-longest unassisted swim on record globally. Find a message from Sean below which outlines the swim. Please do consider making a donation – good luck Sean! GDBO 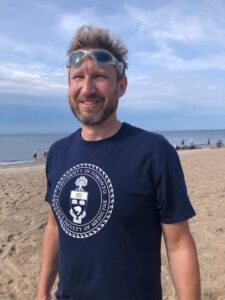 I’m writing because, during the second week of August, I’ll be attempting an 100km open-water swim for charity, and would love your support.

The swim is a two-way crossing of Lake Ontario, Canada, from Toronto to St. Catharines and back.  It will require between 35 and 50 hours of continuous swimming.  If I’m successful, it will be the longest unassisted open-water swim in Canada or by a Canadian, and the eighth-longest unassisted swim on record globally. (“Unassisted” meaning without the help of tides or currents, a wetsuit, or other warmth or floatation devices). 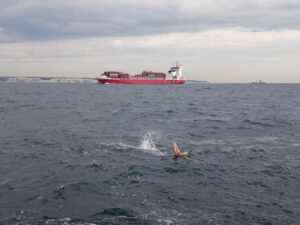 While I’ve done long swims before, this challenge is on a different level.  I’ve been training pretty much continuously since swimming the English Channel last summer to get ready—through tendinitis, cortisone shots, more tendinitis, more shots, splitting my heel open on a bad flip turn, splitting my head open because it turns out you hit piers if you swim with your eyes closed, a parasitic larvae attack (please don’t ask), and a 4am trip to the ER after I somehow managed to completely blind myself at the beach.  For the Channel, I was swimming over 100,000 yards per month; for this swim, I’ve had to hit more than 100,000 yards per week.

I’m raising money for the University of Toronto’s Tanz Centre for Research in Neurodegenerative Diseases, a world leader in scientific research on debilitating brain disorders like Alzheimer’s, Parkinson’s, ALS, Lewy Body Dementia, and CJD. The Tanz Centre’s researchers are doing absolutely fantastic work transforming our understanding of these illnesses and are at the forefront of the global effort to prevent, diagnose, control, and cure them.

This cause is incredibly personal for me.  My father, a criminal defense lawyer in Toronto, passed away five years ago this August after an extremely brief struggle with an unidentified neurodegenerative disease. In November 2016, my Dad successfully completed a complex jury trial. By February 2017, just three months later, he was in emergency care in a psychiatric ward. By May, he had largely lost the ability to talk, and by August he was gone. With few treatment options, all my family and I could do during this nightmarish time was watch, try to adjust to each heartbreaking new phase, and offer him and each other what little comfort we could.

This is why I’m swimming: To raise money for research that would help us better understand, prevent, and treat neurodegenerative diseases like the one that took my Dad.  If you would like to support this effort, you can make a donation here.  Because I’m trying to swim so much longer than I’ve ever done before, I’ve set a correspondingly high donation target: $50,000 CAD. No donation is too small; every little bit helps.

Thank you so much for your support!!

Sean successfully completed the swim at 8am on the dot on 14/08/22, completing 100.6km in 42h37 – congratulations Sean! For more information about the swim and how to donate, see above! 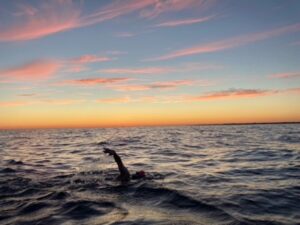