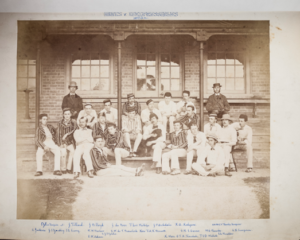 We are told that the Hawks’ was originally a cricket club that emerged from St John’s Eagles in 1872 when the Eagles refused to admit members from outside St John’s.  This was at a time when cricket was buoyant in Cambridge; college cricket was not enough to feed the demand, despite college games extending over two days. Hence there was demand for new student cricket clubs to fill the gaps between college or university games.

So what cricket did the Hawks’ Club play?  The records show that there were regular matches in May and June from when the club was formed, but these started to dwindle from the 1890s as the Hawks’ Club, started to broaden from more than just a cricket club.  There was also a proliferation of club leagues and so Cambridge students were very much in demand to play in those at weekends.

The earliest records showed that the Hawks’ played a mixture of local clubs, usually where there was a country house setting and probably a slap up feed.  These included Whittlesford, Ashley and Bottisham.  The Hawks’ were also instrumental in helping establish the Non-Collegiates for whom there was no college team and so helped to fill a gap left for students who could not afford to attend one of the colleges. In addition, fixtures against Crusaders, Magpies and Inexpressibles (see photo) became a regular part of the season, usually in two-day format.

The Hawks had also established regular fixtures against the colleges. Not just against the stronger colleges with their own grounds: Jesus, St. John’s, Trinity, Caius, King’s and Clare.  Hawks’ also played the colleges that had to make use of the Amalgamation ground, such as Pembroke and  Emmanuel. The records show that a number of these games were also played on Trinity Old Field which was clearly a favourite. It is also worth a mention that at this time there was significant ground congestion during May and June and so fixture lists were published in the newspapers before the season started showing how tiresome exams had been carefully slotted between matches or timed to finish before cricket started after luncheon: no whining in those days about being too busy to play sport. There was also a healthy mixture of formats: two-day games against the stronger sides and then one day games, either in two innings or one innings formats. The two innings, one day games were strange arrangements, usually dominated by the side batting first who, in some cases, just batted once for the duration.

As is usually the case, as a ‘market’ develops, a pecking order emerges and the stronger clubs were also seen playing after term ended, usually in the more established cricket weeks around the country.  In particular, the Crusaders and Quidnuncs had become the most prolific Cambridge clubs, playing throughout the summer at cricket weeks in places such as Streatham, Leatherhead and Stoke Poges.  Most notably, the Crusaders started to take part in the Westmorland cricket week in August 1898, organised by the Northern Nomads.  Not only is this symbolic because it was held in the most important part of the country, but it was where the Crusaders first engaged with the Oxford University Authentics.  Gradually, Crusaders became an unofficial Cambridge University second XI and in 1983, became part of CUCC with annual fixtures against the ‘Tics’ played in three day and one day formats.  Similarly, Quidnuncs became a club for past CUCC players with the popularity of matches fuelled by a Quidnuncs cocktail?  Quidnuncs continued to play a healthy fixture list around the country throughout the season, including three day matches against the services and regular overseas summer tours.

So a Hawk in the second half of the 19th Century could look forward to playing college cricket two to three days per week as well as Hawks’ or club fixtures each week with the local paper at hand to remind them if they needed to pop out for a few overs to register in some dreary, and probably pointless, Tripos exam.

What can we learn from this for the current and future Hawks?  Firstly, that current Hawks do not play enough cricket as college cricket has virtually died out and whilst some students play club cricket in the summer, it is rare.  Secondly we can see that whilst university cricketers, spent their summers playing for their County club, college cricketers were well prepared to go down at the end of term to bolster club leagues clubs around the country.  Today, our cricket clubs can no longer rely on this as there seems to be an obsession with spending term time certificate hunting and the summer hols in dreary office internships rather than supporting their local cricket clubs.