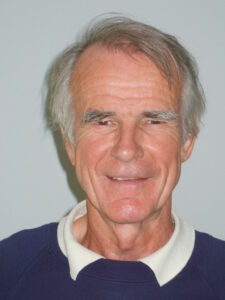 Alton in Hampshire where I run an exercise programme for older people, particularly those with a history of heart disease or who are suffering some sort of chronic infirmity. I am really interested in getting everyone to take more exercise rather than the excellence of their performance.

I may be the least talented sportsman to have been let into the Hawks Club but fortunately the Oxford University Boxing Club had even less talented contenders on the two occasions I took them on. So I suppose my sporting career highlights must be my Varsity match victories.

Boxing isn’t a lot of fun so my best memories of Cambridge sport are playing tennis on the extensive and beautiful grass on the John’s backs. Then there was the fitness training, mainly distance running which I enjoyed but at which I failed to shine. I did take part in the Boundary Run which was a 32 mile non-competitive run around the boundaries of Cambridge. The first time I did it I got a blister at about 20 miles and had to hitch a lift back to the centre – and was picked up by Herb Elliot. Oh dear.

My other sporting memory was playing cricket in a match in 1962 between 11 Gentlemen of The Hanover Club and 11 Celebrated Gentlemen of the University of Cambridge, captained by Kingsley Amis. The Celebrated Gentlemen included Tim Brooke-Taylor and Ken Clarke as well as an assorted collection of others, mostly members of the Hawks Club. 1774 Rules were applied (two stumps, no pads or boundaries).

I did like the old rather gloomy old building which in my day was in a Passage opposite St John’s. The sitting area was ideal for a quiet read – or snooze.

My current sports are golf, tennis and running. My most relivable sporting moment was beating the Hogmoor Enclosure parkrun over 75s record. This a sad reflection of the rather small number of competitors later in life – a great pity. Soon I can try for the over 80s record.

PS Read my blog at https://exercisefitnessandhealth.info

And my book “Get off the couch, before it’s too late. All the whys and wherefores of exercise”. Available at Amazon but more cheaply direct from me at £12.50 which includes p&p. Email me at:  hjnbethell@gmail.com