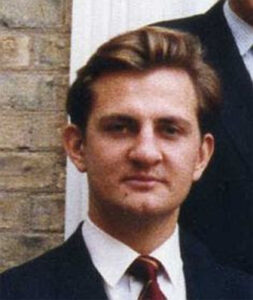 In the Maldives with my wife and three children.

We took possession of Portugal Place in the year after my Presidency, and so the opportunity to sit on the fundraising committee with the likes of Sir Adrian Cadbury, John Marks, and Lord Butterfield was a sheer joy and privilege.  However, the opening ceremony with HRH Duke of Edinburgh was most notable, not least for his interchange with David Dix, a confident second row antipodean and Blue of the time, who suggested he “bring the wife” to the next Captain’s cocktails at our esteemed club.

More general memories include training at Grange Road on misty midweek evenings, giggling with Duthie, Pring, Davies et al. on the back of the coach returning from an away match, and the sheer unparalleled joy of watching Chris Sheasby’s white VW Scirocco being towed away outside the Mill.

I miss being surrounded, all the time, by like-minded, like-humoured people with a similar passion for sport, fun and friendship. And I miss Jim Ashworth’s friendly smile.

Ref fixture for OURUFC against the Penguins above, I would ask Brendan if I could play on the other wing.