10 Cambridge rowers have been involved in successes at the World Championships, thus qualifying their boats for entry to the 2020 Olympics.

The Hawks’ Club Committee is pleased to report that Hawks’ Club Members have voted overwhelmingly in favour of its proposal to formalise the basis on which Resident Ospreys access the Hawks’ Clubhouse.

Resident Ospreys have been using the Hawks’ Clubhouse on an informal basis for a number of years – socially, as guests of Resident Hawks, but also for meetings, prize-giving ceremonies and dinners.

The Committee has now received a clear and strong mandate from Club Members to formalise arrangements. This move will solidify the long-standing history of cooperation that exists between Hawks and Ospreys, and will have far-reaching benefits for both Clubs, as our respective Members continue to work closely together to champion sport at Cambridge and organize joint social, fundraising and community outreach activities.

The Hawks’ Club Committee will now begin the work necessary to implement the proposal. In the meantime, if you have any questions about this matter, please contact president@hawksclub.co.uk

Some 14 of the victorious 1973 CURUFC side, supplemented by others who toured Rhodesia in summer 1974, met at the Club on 4 December 2018. Guests had travelled from all over the world: Australia, South Africa, USA and Dubai.

In addition, Donald McKenzie, (Magdalene 1972-74) a Zimbabwean Hawk (cricket) and cultural attaché for the Tour, plus Austin Jessop, (Fitzwillian 1970-73) the 1972 scrum half  also attended. We finally welcomed  as our Guest, the then coach, Ian Robertson (Christ’s 1966-68)

Robbo had just retired from a lifetime of service to rugby broadcasting and we were delighted to say thank you for all he has done. In return, he regaled us with just enough anecdotes to make us buy his autobiography, but not so many that we chanted the end of the stories.

For lovers of history, we toured as the Light Blue Travellers, since both the university and Labour Government opposed our visit. Each tourist was given the opportunity to decide if he wished to tour a country led by what was then an ‘illegal’ regime, having declared UDI from the British Government (and incidentally was at war with terrorist infiltrators, some led by Mr Robert Mugabe). One player turned the opportunity down.

We won all seven matches, played all around the country. Four players played every minute of every game. No substitutes. To bring us down to earth, on one occasion we were given an armoured car escort from Victoria Falls airport to our hotel.

Whatever your politics it was an extraordinary opportunity, fully grasped.

Pushing the Boundaries: Cricket in the Eighties 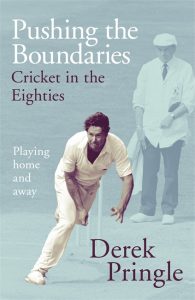 ‘Pringle’s tale is both a love letter to the greatest player of his generation, Sir Ian Botham and an engaging romp in which cricket only plays a walk-on part.’ Michael Atherton

The Eighties was a colourful period in English cricket. As a member of the most successful team in Essex’s history and an England side capable of extraordinary highs and lows, Derek Pringle was lucky enough to be in the thick of it….

Read the full review here on the publisher’s website: http://bit.ly/2zUsWCu

To buy copies of the 416-page hardback and enjoy free home delivery: http://bit.ly/2zUU5VX

A Hawk at the Olympics 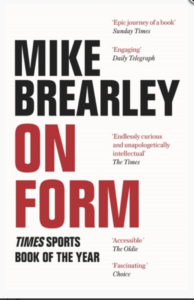 Mike Brearley OBE (St John’s 1960-1963) captained Cambridge University, Middlesex and England. He captained his country in 31 of his 39 Test Matches, losing only four. He was the President of the MCC in 2007–08. Since his retirement from professional cricket he has pursued a career as a writer and psychoanalyst, serving as President of the British Psychoanalytical Society 2008–10. Previous publications include  The Art of Captaincy: What Sport Teaches Us About Leadership (2015).

Internationals and Olympians in nine sports

The next edition is planned for April 2018. Will your sport be included in that edition?

An A2 poster of All Olympians can be downloaded by clicking on the image. It is a list created by the University and updated by Hawks’ Club in March 2017

The Hawk is produced twice a year and provides Members a detailed review of recent sporting contests, articles of interest and obituaries of distinguished Members. If you would like to contribute an article please let the editor, Tim Ellis, know.

If you currently receive the publication in the post, please update you email details in the Members’ Directory on this website or send them to Dylan, our administrator. This will allow us to send issues to you electronically and reallocate the saved money to more appropriate areas.

The Origins of the Cambridge Blue