The Hawks’ Club has been in existence since 1872, and represents the best sportsmen in the University of Cambridge. Membership is by election only, and the usual criterion is that the candidate should have his Blue – i.e. have taken part in the match or race against Oxford in his particular sport. The Club boasts around 5,000 Members worldwide, with around 150 members in residence at the beginning of the academic year, to as many as 250 by the year-end.

Many famous sporting names have been, or are, Members – Rob Andrew, Mike Atherton, Chris Brasher, Ted Dexter, Gavin Hastings, Tony Lewis, and George Nash to name just a few. For a list of hundreds of internationals in just five sports see here.

In 2017, the Hawks’ Charitable Trust made Bursary Awards to applicants from over 40 sports and 31 Colleges.

The Clubhouse is at 18 Portugal Place, Cambridge, a pedestrian-only street opening off Bridge Street.

Further information about the Clubhouse for reciprocal members can be found here. 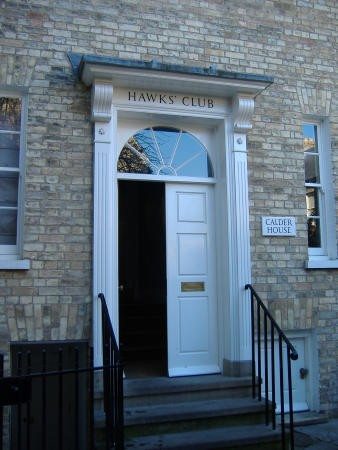 It is governed by a President and Committee, elected by the Members in residence at the end of the year, to take up office the following year. The Committee is responsible for the election of new Members.

There are (currently) three Trustees, all Hawks of long-standing, who are responsible for the finances of the Club in residence, and represent its interests on other bodies. The current Trustees (as at 2020) are Anthony Hyde (Girton, Athletics, Cricket, Powerlifting), Okeoghene (Oke) Odudu (Sidney Sussex, Athletics), and Robert Harle (Downing, Athletics),

This body organises the Annual Dinner which is held on the eve of the Varsity Rugby Match. From 1936 until 1992, when the new Clubhouse opened, this organisation provided a key contact to Hawks worldwide. The Dinner remains the most significant event of the year for most Hawks once they have gone down.

For 2018 a broad range of events has been established across a broad range of sporting events which will complement both this Dinner and The Hawks’ Sports Lecture and Dinner, now in its second year with the lecture now announced as Ed Smith, the England cricketer, broadcaster, columnist and academic.

The current President is normally invited to sit on this Committee.

We are aware that some countries have their own organisations for keeping in touch with local Hawks (see here). We would be interested to hear from others and will publicise them on this website.

The company was formed to raise funds for, to manage the refurbishment of, and to manage the day-to-day affairs of the Clubhouse. The Company is owned wholly by Hawks.

The Trustees hold its two Ordinary Shares (‘golden’ shares) which grant them ultimate control. In addition, there are 3,200 odd £1 Redeemable Ordinary Shares linked to £500 Loan Notes. Some 72% of these are now owned by the Club including those held by other individuals who have waived their right to repayment. The Company has a liability in respect of the 757 Loan Notes held by other individuals, but has no other borrowings and the property is worth considerably more than the balance.

The Club’s income is used to purchase additional shares, and thereby increase its proportion of the whole – the aim being to enable the Club to own the entire Company, and hence the premises.

There are currently 10 Directors, including the Secretary of the London Dinner Committee. The Board meets 2-4 times per year. The current Club President and one of the Trustees will normally attend.

The Board delegates responsibility for the day-to-day management of the Clubhouse and its commercial activities to a Management Committee, comprising representative Directors of the Company, a Club Trustee, the current Club President and Secretary, a representative of the Dining Rights Club, (DRC) the Club Administrator, the Clubhouse Manager and such other expertise as the Committee requires from time to time. It normally meets monthly.

The Hawks’ Charitable Trust: a major source of sporting bursaries

This was set up in 1996 on the back of a substantial bequest from David Jennens (see here). Since then, it has grown to become the biggest single source of sporting bursaries for men and women in the University. There are currently six Trustees, including a member of The Ospreys Senior Committee.

Under the umbrella of the Clubhouse, there is this additional Club. Membership is open to men and women in the Cambridge business and professional community. It provides a useful link to the professional life of Cambridge and has its own Committee, on which sits one of the Directors of the Company, and whose Chairman sits on the Board of the Company.

None of the officers of these various bodies (save for the Clubhouse Manager and the Chef) receive remuneration for the time that they offer to the Club.